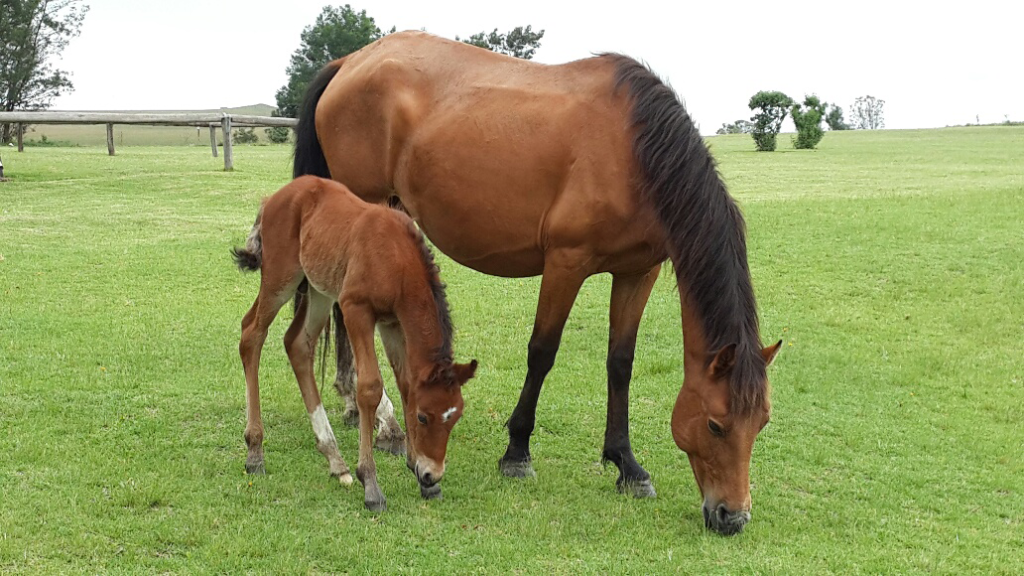 A seemingly long time ago, when the Drakensberg Mountain Retreat was in its’ infancy, being built brick by brick by late owner Dave and his nephew Judson…a little waif-like horse came into our lives. She wandered onto the farm, tiny and frail and if it was not for the care given to her by owner, Dave, she would not have survived. This foal was later named “Annie”. She made her home indoors in a bed of straw in what is now the lounge at the Drakensberg Mountain Retreat. Slowly but surely, with care and dedication she built up her strength to become a robust, healthy mare. She ruled the roost and had free reign in the Lodge, swaggering in and out of the dining room to greet us all with a gentle nudge. Once Annie was big and strong enough, she was sent out into the great outdoors to join the other horses where she happily adjusted into a feisty, friendly filly.

There was great excitement when she produced her first foal who was named “Charlie” after my husband (Dave’s brother).  In time she increased her brood and we were told that another foal, much to the delight of our children, had arrived. This foal was named Craig, after our son. Later, Annie produced one last foal, who was named “Kathryn”, after my daughter. Not many families can claim a family of horses as namesakes but we have that honour at the Drakensberg Mountain Retreat.

You cannot miss Annie; she’s the one with the soft gentle eyes and the jaunty gait of ownership over the whole place. When you next visit the Drakensberg Mountain Retreat, take a carrot or two for the horses and I wager that Annie will be the first to come up and gently take it from your hand.

View our gallery for more photographs of our family of horses and contact us today to come see them in the flesh and stay for a few days.